What are Molten Carbonate Fuel Cells?

Molten Carbonate Fuel Cells (MCFC) evolved from work in the 1960's aimed at producing a fuel cell which would operate directly on coal. While direct operation on coal seems less likely today, operation on coal-derived fuel gases or natural gas is viable.

Photo courtesy of Dept of Energy

What are Phosphoric Acid Fuel Cells?

Phosphoric Acid Fuel Cells use liquid phosphoric acid as an electrolyte—the acid is contained in a Teflon-bonded silicon carbide matrix—and porous carbon electrodes containing a platinum catalyst. The chemical reactions that take place in the cell are shown in the diagram to the right.

The Phosphoric Acid Fuel Cell (PAFC) is considered the "first generation" of modern fuel cells. It is one of the most mature cell types and the first to be used commercially, with over 200 units currently in use. This type of fuel cell is typically used for stationary power generation, but some phosphoric acid fuel cells have been used to power large vehicles such as city buses.

Phosphoric Acid Fuel Cells are more tolerant of impurities in fossil fuels that have been reformed into hydrogen than other fuel cells.

The CHP System below is Rated at 900 kW and Features:
(2) Natural Gas Engines @ 450 kW each on one Skid with Optional
Selective Catalytic Reduction system that removes Nitrogen Oxides to "non-detect."

The Effective Heat Rate of the CHP System below is
4100 btu/kW with a Net System Efficiency of 92%. 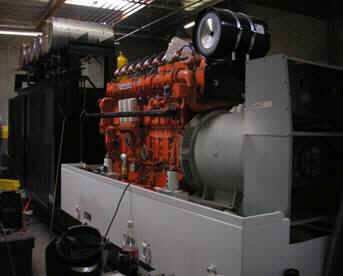 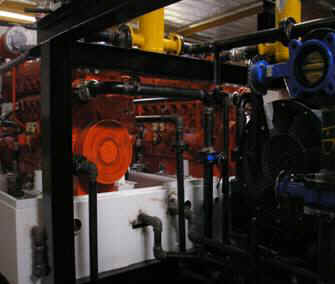 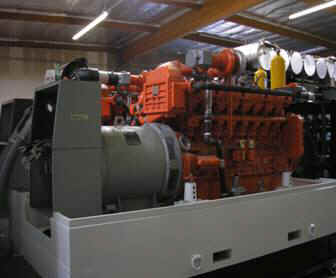 A CHP System may be the best solution for your company's economic and environmental sustainability as we "upgrade" natural gas to clean power with our clean power generation solutions.

Our Emissions Abatement solutions reduce Nitrogen Oxides to "non-detect" which means our CHP Systems can be installed and operated in most EPA non-attainment regions!